Commissioned Standard Reaper Cleric of Calistria finally finished. This model was a lot of fun, but some of those details are so tiny! 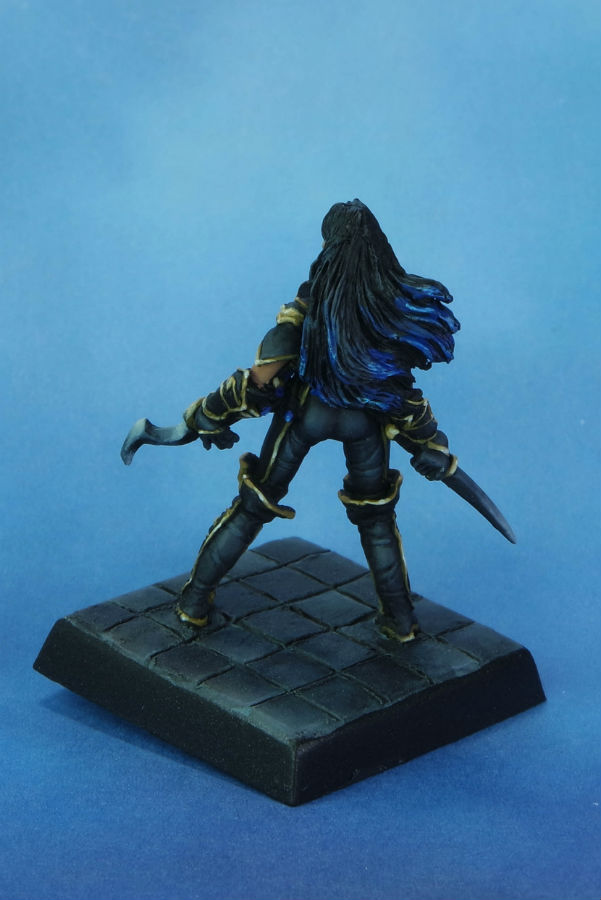 Here’s some progress on the huge Vrock model. The turquose in his mouth isn’t staying…it was a quick experiment while I was already airbrushing. 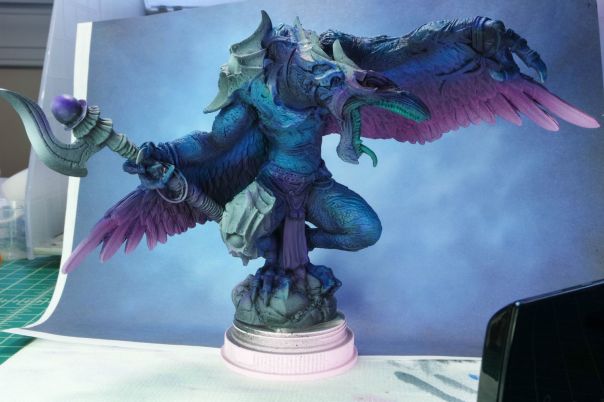 This is a model I recently did for a commission at Standard Level. I do really enjoy this sculpt, and I will be painting her again in the near future. 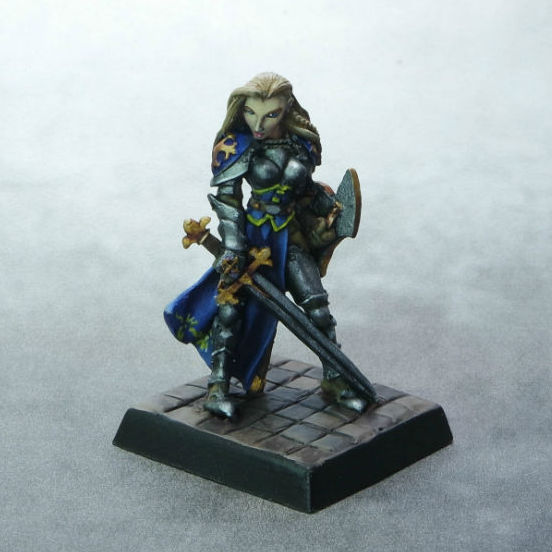 Posted in For Sale, Reaper Miniatures

Both of these brushes are “the same.” They are both size 0 W&N Series 7. The one on the left has been used for about 20 hours of painting. The one on the right has been used for heavy work (painting bases, basecoating over primer, occasional drybrushing) for 2 years after it lost its point. Even well-used “ruined” brushes have some uses! The 20 hours brush is starting to lose its point when painting, and I bet I have at most 20 more hours before I have to use a new one for eyes and such. What I have found is that the bigger Series 7 brushes hold their points for far more painting time than the little ones. I have a size 2 that is probably 60 hours in and it holds its point better than this size 0. When your brush has a decent point, you do not really need a small one! In fact, sometimes a small brush can be a nuisance…such as when you load the brush and by the time you get it to the model the tip is dry but you were going to paint something super small that *needs* a good point.

More WIP photos of the awesome Reaper Cleric of Calistria. I’m going to finish this one soon! 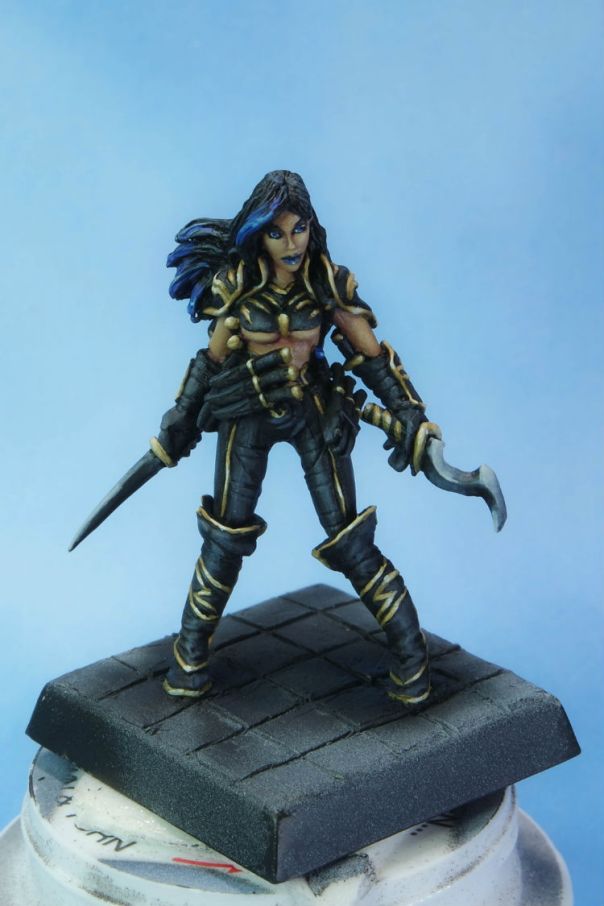 Happy St. Patrick’s Day. I think this is the perfect day to show off the Reaper Leprechaun and Owl that I just painted. I was a little limited on time for this model, but he was super fun and in the end I’m pretty happy with him.

Here’s the beginning of a fun little mini for a St. Patrick’s Day themed event. 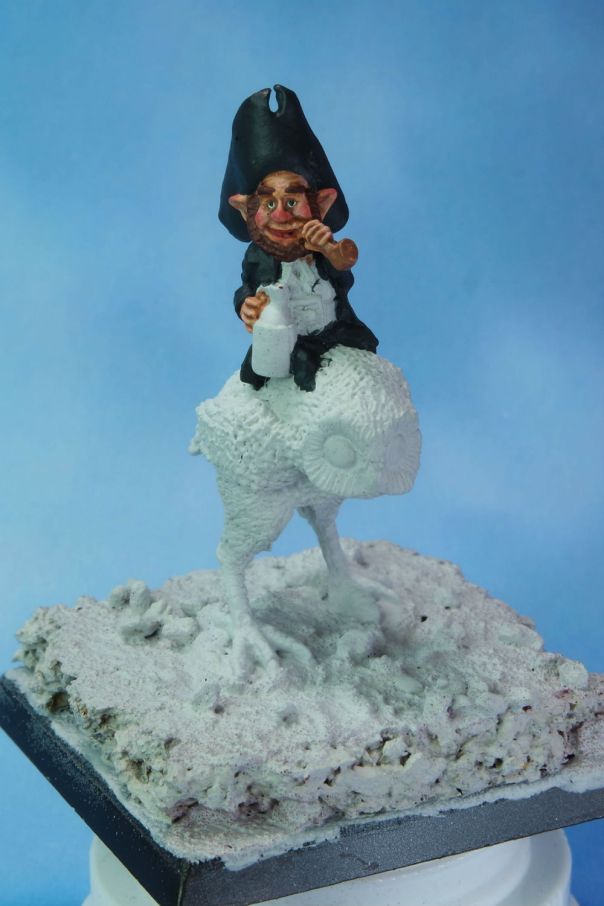 I’ve just begun a large monster from Ultraforge called Vrock. It’s to be used as a Greater Tzeentch Daemon in Warhammer Fantasy. The cast had some…issues…but I did manage to clean it up. He’s too big for my photo background!

Here’s another quick update to the Reaper Cleric of Calistria commission. Per my client’s request, her eye color was changed and the skin was lightened. I like this new eye color much better, it really stands out against her skin tone. The gold lining is being really fiddly. The lining is actually so tiny I can barely see it, especially with black around it so it doesn’t really throw a shadow very well making it even harder to pick out. One of the benefits of WIP pictures is that I can take a high resolution picture of the model, zoom it to 100%, and see all the areas that need touch ups…so that is the next step here. 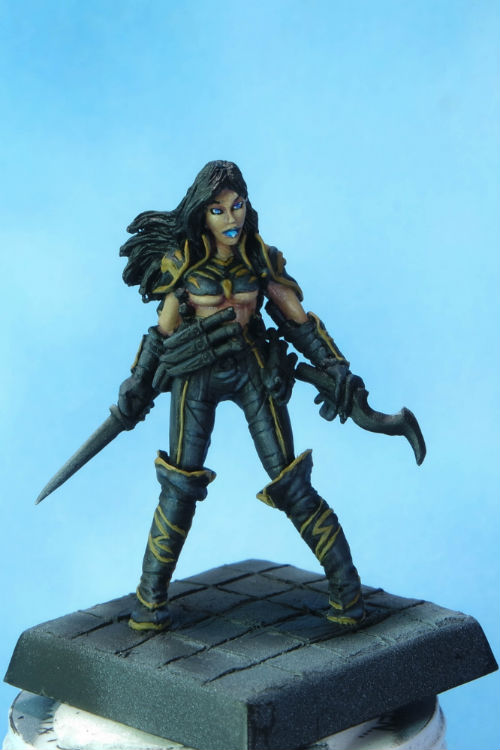